The most important indoor sports facilities owned by the City are the Swimming Hall/Sports Centre and the Nurmohalli, Ritolahalli and Kirmaushalli sports halls. The most important outdoor sports facilities are the pesäpallo (Finnish baseball) stadiums in Nurmo, Seinäjoki and Peräseinäjoki, the athletics fields in Seinäjoki and Ylistaro and the grounds of the Ice Sports Centre, where you can find three standard ice rinks, an artificial ice rink and an artificial turf pitch. The area’s public services are complemented by the privately run Wallsport Arena and OmaSP Stadion.

In winter, more than 50 outdoor ice skating rinks are created on sports fields and in schoolyards. Some of these are set up as ice hockey rinks. The ice rinks are free to use.

Ice skating rinks on the map

The Ice Sports Centre has two normal ice rinks, a light-activities ice rink and a large artificial ice rink.
During the winter, the Ice Sports Centre also offers public skating times in addition to reserved times for sports clubs. In the summer, the artificial ice rink is converted into tennis courts, a basketball court and a floorball rink that may all be used freely.
Additionally, the area has an artificial turf pitch, and Jouppilanvuori’s fitness/skiing tracks pass by the centre.

Ice Sports Centre on the map

Seinäjoki has several sand, grass and artificial turf pitches that provide excellent opportunities to compete and play football, baseball, American football and field hockey as well as engaging in track and field. The city also has basketball, beach volleyball and tennis courts.

Local sports facilities and general sports pitches may be freely used by all residents and are located in schoolyards or residential areas. Grass pitches may only be used by reservation by clubs and societies.

Pitches on the map

Fitness tracks on the map

During the winter, the City maintains about 200 kilometres of skiing tracks. The tracks run along fitness tracks, nature walks and near schools and day-care centres. The tracks include options for both experienced skiers and beginners.

Ski tracks on the map

There is a wealth of route options for cycling in the Seinäjoki area. In addition to bicycle paths, many fitness tracks are also suitable for cycling. Excellent examples are the Seinäjoki-Ilmajoki track – an unobstructed adventure exercise route – and the track around Lake Kyrkösjärvi.

The city of Seinäjoki organises life guards on the beaches of Kyrkösjärvi, Sahanlampi and Tanelinranta from June to August. The beaches with lifeguards also have toilet and changing room facilities. Swimmers and parents must remember that the presence of lifeguards does not lessen parents’ responsibility for the safety of their children.
Seinäjoki also has other swimming spots without lifeguards in the form of rivers, lakes and old quarries.

Beaches on the map 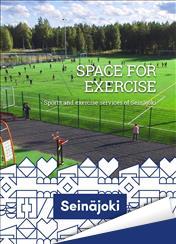